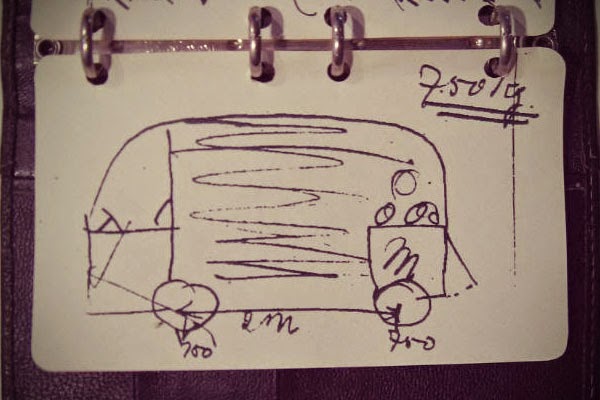 This is the first sketch that the birth VW Bus comes from. Dutch Ben Pon visit the Volkswagen factory in 1947, which was later ruled by British workers. Interested to buy the first beetle imported into the Netherlands, Pon saw an improvised boxy parts mover on the factory grounds, and lights popped. 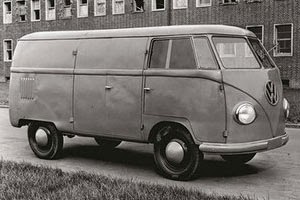 The "Plattenwagen" (flatbed truck) appreciated the inherent flexibility of the VW layout and a sketch imagining a compact MPV, weighing 750 kg (1650 lb), which can carry the weight of freight much more. He shared his idea with the England manager, but they are too busy trying to meet the demand of the Beetle.


But not shine Pon idea dead after head VW Heinz Nordhoff, the design is up, and the two prototypes built. But the beetles at the height of the platform, you will need to repair, with a ladder-type frame in the body block. But when the body was sent to smooth aerodynamic testing, which is the proverbial brick, which is a serious problem, when all 24 hp on tap.

A revised front end of this scale model greatly improves the resistance coefficient, 44, which is slightly better than the Beetle (obviously the whole is greater resistance due to the front largest). Nordhoff approved type 2 for production, based on the first prototype rolling of 1949 (below).

Production began in the first Cargo Transporter, and Kombi followed, with several windows and two removable seats on the rear.


1950, the first 2 models Kombi and Samba Microbus were launched, Kombi with 11 windows and Samba with 23 windows all round, and optional roof windows so favored by sightseeing buses in Europe and collectors today.


The first Volkswagen Bus, seen here in an early brochure, debuted in 1950 and was called the Transporter, or VW Type 2. The VW bus's remarkable space efficiency and clever design are best appreciated as a passenger, with its tall upright seats and superb views; or of course with a nice cutaway, like this. 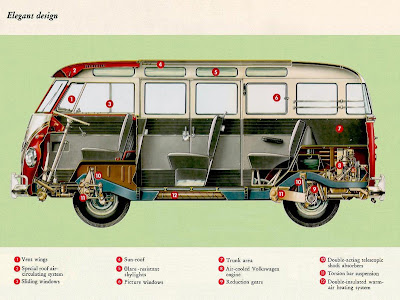 History of the VW Bus