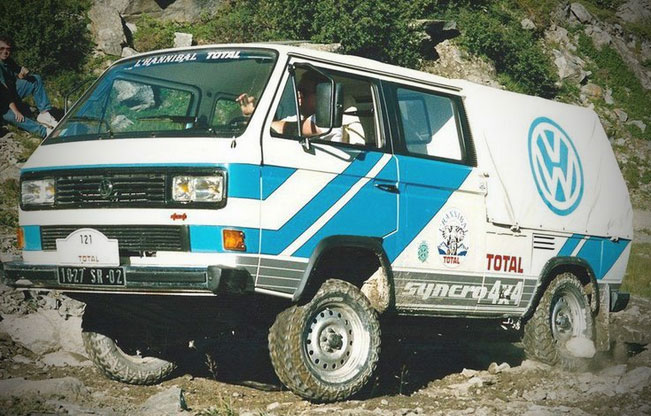 TODAY IS THE 64th anniversary of the Volkswagen Type 2, let today discuss one of the best variants of the VW bus. This is the most strongest and reliable microbus ever made in the world... exaggerated..? OK, let's reduce its scope... it's absolutely true words of an automobile ever produced by Volkswagen. So what is special about..?

The Volkswagen Syncro Transporter is an all-terrain vehicle based on third generation Volkswagen Type 2, they come with 4x4 drivetrain and is the third four-wheel drive vehicle ever developed by Volkswagen with seriously and certainly after Kommandeurwagen and Schwimmwagen, both are the light military vehicles during World War II.

The statement above is probably right, the Syncro is one of the toughness and most versatile vehicles ever produced, able for military use, and owned by civilians for fun. No doubt is the BEST VW Transporter ever made. 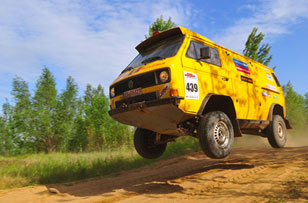 Short Story of The Volkswagen Syncro Transporter
Over 40 years after the war ended, Volkswagen decided to modernize its 4WD system technologies. The reason is when a couple of VW engineers want to camp far away from mainstream regions in Africa & Europe for something a little more rugged and off-road adventures desired where their Westfalia camper can't do it, then they decide to create the VW Syncro.

Basically, the Syncro 4WD system was developed from the Ferguson system it was invented by a Briton and is commonly used on Jensen cars and succeeded well tested on the racetracks. Besides its own use Volkswagen took this system for the Puch Haflinger it's a military vehicle produced by the Austrian company Steyr-Daimler-Puch.

Since 1975 before the Ferguson system was used for the final basic, Volkswagen has done a lot of trials and extensive testing on its own system and or with the Audi Quattro system. And the result of development with the Quattro system applied on Iltis where they used for German Armed Forces vehicles.

Goes to production
Starting from 1985 and finally in 1992, all the Syncros assembly in Graz, Austria concurrently with Steyr-Daimler-Puch, the first Volkswagen Syncro hit on the market in 1986 comes with 3 engine formats available in 3 body styles and not to miss the camper and RV model also. They solved the crowd... no... they make it.

How it works
The Syncro is an automatic 4x4 drivetrain system, are is a different system with usually other 4WD vehicles use. The Synchro has silicone liquid to make 4x4 get it to work, so when you driving on normal roads you'll feel the same as usually RWD car work, but when through rough or slippery roads without the intervention you'll get 4WD.

How it works, when getting into rugged or slippery terrain the viscous coupling (a Synchro special gearbox) getting works harder with more often torque or at any time the rear wheels began to slip or spin the silicone liquid automatically engages and responds, he started hot and begins to thicken then deliver pulling power to the front wheels so it makes 4x4 worked.

The viscous coupling has 4 gears plus "G", the G is a very low ratio gear that was very useful for going to Off-Road Playgrounds or down extreme slopes.

Remember, when you feel 4x4 doesn't work, please check the silicone liquid condition, it same as the lubricant engine that needs renewing when has expired or is exhausted.

We hope this article be useful for some prospective enthusiasm.