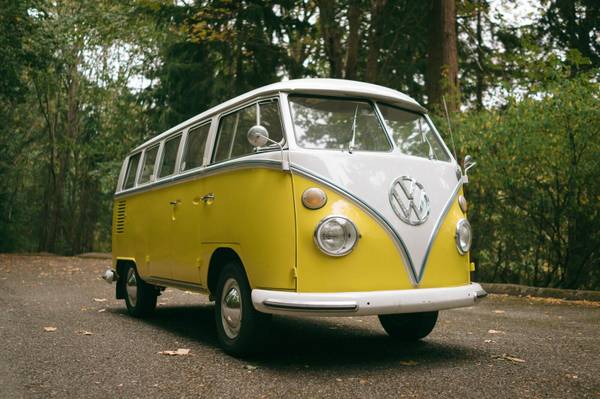 Year of construction 1965. VW Bus 13 Window Deluxe for sale in Shoreline, Washington. The bus has been completely restored and rebuilt by current owner and his father with the professional intervention, more than four-year restoration, and the result is truly cool. This VW Bus offers without the middle and rear passenger seats, seems it only a bed don't know if it can be converted into a seats. Despite interior look awkward, but it look very tidy and clean overall. Nice to kept it, found this one was posted on Craigslist about 15 days ago for $29000.

Owner says
1965 Deluxe VW Bus/Transporter has been owned by me over 10 years and been nothing but babied way too much and it's time to let her go!

I bought the car with some money left from my grandpa inheritance after he passed away before I was able to drive. I bought it thinking this will take 2 years to do a complete body restoration, instead it took 4 years and then a later 7 month motor project.
The car has been completely restored by me and my father with professional elements of the restoration being hired out.

All of the major problem areas classically known for rust on these cars have been addressed and improved with patch panels from Wolfsburg West which is the premier resource for authentic restoration panels and parts. I really am glad I bought the 13 window deluxe rather than the 21 window version, it was a much easier restoration since it lacks the structural reinforcement underbody that is notorious for being needed to be completely redone on the 21 window. Extra steps were taken to ensure flush mount of panels and the elimination of excessive body work by pre flanging all patch panels by hand. The panels cover pretty much the lower third of the car this included floor plans on driver and passenger sides, entryway of rear compartment and part of the sub chassis the hold the floor in the passenger compartment, bottom of the barn doors, wheel arches, battery tray and quarter panels. All opportunities were taken to apply paint to previously bare metal surfaces behind body panels increasing the longevity of the car. All instances of spot rust were treated with a portable sandblaster.

The paint on the car is Delstar out of the PPG line of paints. The base coat is epoxy enamel that goes on extremely strong and has fantastic adhesion properties that allows the paint to flex and adhere to metal even when it is dented. Rage gold was used to fill seams between the patches and get flat panels. The sandable primer was then applied followed by sealer then top coat applied by a professionally by Spray King in Edmonds Washington.

The paint is a big WOW factor on the car, it is just that classic yellow bus that everyone wants their picture with and you will get stopped and chatted up at every gas station or road stop. I was waiting at a red light once and a woman ran up to pose in front of the car and her friend ran into the intersection to take the picture.
The interior seats are in good shape, sort of a blue corduroy cloth material, front bench is a 2/3 fold and back is a Z Bed that was 70's modification that I appreciated, loved being able to pull over and camp on the side of the road. The headliner was put in professionally last year, and the interior panels were put in this year both are vinyl purchased through Wolfsburg West and are meant to match the original interior. Underneath the door panels is a closed cell foam insulating/quieting pad and over the engine bay is covered in a 3M sound deadener. This really quiets the cabin noise a lot and has made a huge improvement in ride comfort compared to a stock bus. All interior lights have been converted to 12v along with all the necessary mods being made to the engine.

The engine is a 1641cc motor built by Jack at Wolfsburg Motorworks. 1641cc is as big as you can go without boring out the crankcase to make more room for more power. More importantly every moving part of the engine was balanced. I cannot recommend this enough for those of you owners out there just reading this ad for fun. It used to be that winding up the rpms in the car felt like you were driving a washing machine with a bowling ball in it. With a completely balanced Crankshaft, pistons, balanced and lightened flywheel the car winds up like any modern car. You can stomp on the gas on a hill and get on top of any gear rather than downshifting like I used to before the overhaul. The engine has the stock air cleaner since it has superior engineering to cone paper filters and works with the crankcase breather hose perfectly and preheating function to prevent carb icing in winter. The car has a bosch blue coil to help with fast starts. Nothing has been done with the gearboxes/ reducers on the rear axle to give this thing better freeway speed. For those of you who don't know these were originally installed on the car to give the car more torque given its small motor. I like it this way because getting in an accident in this car is like hitting a car on a bike with a frying pan on the front of your handlebars. In other words you wouldn't survive a big crash and having the reduction boxes keeps you from driving faster than 60mph.

I like driving slow, this car makes you enjoy life and appreciate things more. People are just as stoked to see the car on the road and you will be blessed by people's reactions.