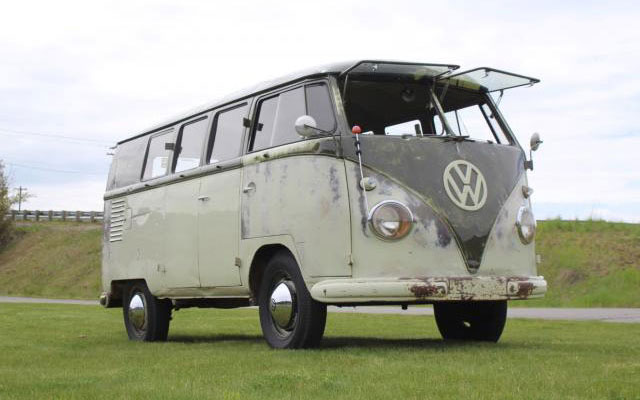 Year of construction 1955. VW T1 Splitscreen for sale in Boca Troy, Montana, USA. Found this one on the samba was posted about five months ago and is still online today. As shown here Germany-built assembly at the early Wolfsburg factory, was sold in the US market as standard series with 11 window styles, it could be a remarkable original example of the Palm Green - Sand Green microbus on the market today.

Owner says
Listing for my Dad.

This is his 1955 Wolfsburg built Palm green Sand green standard bus. He’s owned it nearly 10 years and in that time has documented thousands of miles on it. This bus is ready to continue to enjoy for thousands of more miles. Recently it has had its transmission and RGB’s fully rebuilt as well as the entire vehicle being serviced. It has a 36hp in it however it is not the numbers matching engine. The correct Bias plys are 2 years old with around 100 miles on them. It drives extremely smooth.

Bus is a time capsule with roughly 95% original paint. Recently underwent a full detail. It has original paint ambulance fans as well as original paint safari windows installed. The headliner was redone a few years back by Doug Denlinger, otherwise the rest of the interior is all original. All door cards are original as well as the seats. Still sporting its barndoor 6 leg middle and barndoor rear seat in original upholstery.

Bus is complete and ready to go. All keys work and comes with hand crank as well as original pgsg tool roll. You will have a hard time finding a more complete original pgsg bus out there.