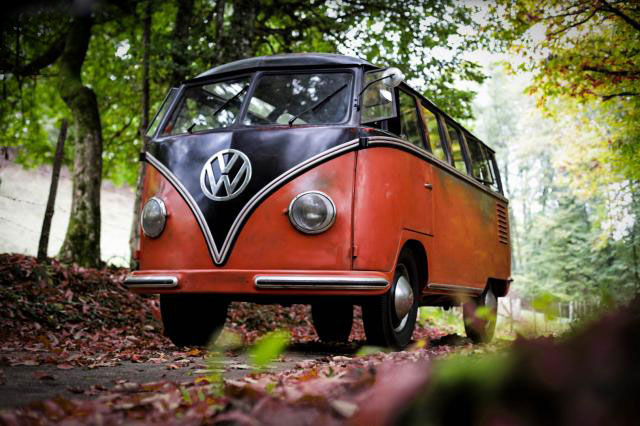 Year of construction 1952. VW 23 Windows Samba Deluxe Barndoor for sale in France. Found this one, being offered for sale on Thesamba was posted about a month ago and is still available today. It could be an extremely rare microbus example in the world today and is one of the most valuable collectible items offered in the market today. As shown here is a 1952 model example, powered by a modernized motor by NOS industrial engine and a new gearbox, it would be running smoothly and strongly. The microbus location is in France but the owner is ready to help on shipping it worldwide.

The owner found this bus has a damaged body had a crash with rotten drivetrains without an engine and left to rot for 51 years in the backyard, so this is one outstanding outcome of a total restoration Samba project, not finished yet but not far from the finish line.

Owner says
My 1952 Barndoor Deluxe is now for sale.

It's probably your only chance to get a 1952 Deluxe with such a patina and history.

VIN 20-29559, which makes it a late June 1952 chassis number, out of the factory in early july.It makes it very early, with (in extremis!) some cool specific details like the 100mm gas tank, the split beetle type armrest, the T air filter, the split beetle type battery attachment, the early VW dash logo (without split between V & W).... etc, etc. (and of course all other 52 details like the uber cool deep skylight windows or the piano hinge quarter lights...)

It has a crazy history, being one of the first 12 cars, ordered by VW Canada in July 1952 to expose the Volkswagen for the first time in Canada, at The Canadian National Exhibition in Toronto. It makes it the earliest Canadian VW ever... From what I know VW Canada may have kept it for a few months/years then sold it to a German guy living in Ontario, who then sold it to Bill around 1956. Bill was a carpenter and used the bus daily to go to work until 1961 when, from what he told me, "something broke on the steering" making him lose direction and crash into the rear of a truck parked on the road side. Bill has been seriously injured in the crash and needed 5 years and several surgeries to walk again. He kept the bus in his backyard nevertheless, being so attached to the car who dramatically changed his life. The bus sat far in his backyard, under a tree (and from different sources including Bill a bear used to live in it !)..... It stayed there until 2012, when I had the luck to move to Canada near his place and got the opportunity to know about it and get in touch with Bill thanks to a local VW enthusiast who's friend with one of Bill's grandchild. I managed to get a deal just before to go back to France and brought the bus with me as a nice souvenir...

Since that day, I had in mind of rebuilding the bus with only the best parts available, digging a huge quantity of NOS and good used BD parts all over the world for 8 years. When I had most of them and felt the restoration could finally begin, I felt that it also needed a killer welder to make the bus justice and so, for this time I was maybe not the guy for it. I also didn't want the restoration to take 10 more years, so I chose to give it to Eugene Tolerie, a well known welder in France often working on VW & Porsche. He rebuilt the chassis on a Celette Jig with the original rear section, and lots of NOS chassis parts to complete it (NOS outriggers, inner sills, belly pans x3, ..Etc). He also restored the body with LOTS of NOS parts like a NOS long side panel, NOS 5 pieces front floor, NOS battery trays, original Bulkhead, NOS B - C and D pillars, etc. As the front clip was damaged we used an early 53 donor front clip with the correct early style A pillars. Eugene managed to straighten the roof that was dented on the front and all of it (except rust repairs) is still original. Decklid, cargo doors, and passenger doors are the original from the bus. Only the driver door has been replaced (by a correct 1952 door in great shape). The dashboard was bent in the accident and, because he is used to them, it has been sent to Mark Spicer in the UK to save it. Everything has been spot welded as it should, including the rear floor on full width !

The bus came with its original drivetrains but unfortunately the original gearbox cases were too rotten and had to be replaced. The crashbox and RGB restoration has been done by a gearbox professional. The bus came to me without an engine so I installed a NOS industrial 25hp engine that of course runs great. From the Canadian order paper, I know the original engine number so it can be restamped if wanted. I think I can count the reproduction parts used on my fingers... almost everything is original VW parts.... NOS or used. Even the hard to find luggage bar uprights, jailbars, chrome luggage rails, louver trims, BD front chrome emblem ... etc I even managed to install original rubbers almost all around. I think this gives the bus the character it requests to fit its patina, even though I have to admit that doesn't make the bus waterproof.... I didn't intend to drive it under the rain so didn't care much but you might want to replace at least the skylight window seals if you want to make it an all weather bus (which currently are all from a 52 deep skylight samba !! As are the rear windows seals). Most of the screws are Kamax, Verbus, Dorn, Knipping in the correct size... Most of the parts are original paint (tank, spare wheel tray, gearshift, handbrake lever, steering column, all dashpods, grab handles...). Seats are original BD deluxe seats with original upholstery in the correct early version with the specific (51 to 53) leather piping. I did my best to get every parts correct. Most parts wear the 29 parts number were they should... even the 5 beauty rings are either 3/52, 4/52 or 5/52 dated.... as are the Speedo (6.52), the NOS D-regulator (6.52)...

If I could kept the bus there are of course a few little things I would improve : some repairs on the front seat base vinyl, some very little paint touch ups, a few seals to replace if i could find nicer OG ones, some door card washers/screws to replace... but this are really minor details compared to the huge work it has been to restore it. NO EXPENSE HAS BEEN SPARED and literally ALL my money went into this bus during the past 10 years. Probably a bit too much money and this is why now it's finished it has to find a new home so I can move to other projects.

I'm still waiting for the definitive title for it after I got it inspected so it will not be ready to go before a few weeks but i begin to test the water now, as i know this kind of sale will not conclude in a day anyway.

So I'm open to offers, but don't expect it to be priced as a 53-55 barndoor Deluxe. The body bumper pre-As are not priced as the later ones ! I can take a pre-67 VW-Porsche in partial exchange up to 60-80k€ value.

Car is in France and I can deliver it to any place in France to help you in shipping it worldwide.
Late reconditioned steering box