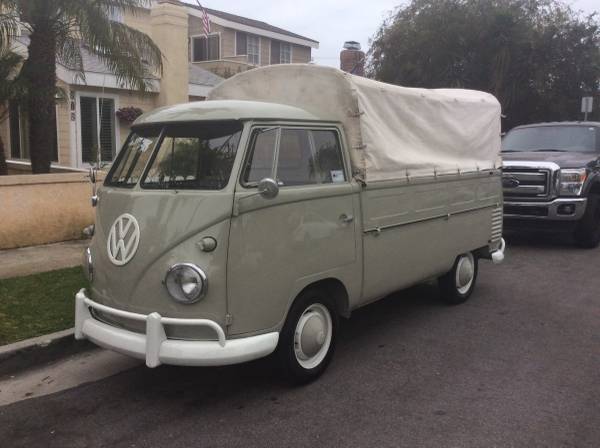 Year of construction 1960. Volkswagen Single Cab for Sale in Orange County, California. As shown here is an original example of first generation Volkswagen truck, over half of century still in awesome condition for its age, built in 1959 and released as the 1960 model being offered for sale by owner for $28000. If you're interested please read details below.

Owner says
This truck was born in October of 1959
so it's a early single cab that's in great shape
It's all original metal,
,(NO METAL WORK HAS EVER BEEN DONE ON THIS SINGLE CAB)
It's has all original paint inside the cab
The interior is all original .
Doors have OG glass ,
Front windshields are new with new rubber seals.
New rubber stoppers.
OG front rubber Matt .OG steering wheel.with loud horn.
I didn't paint the treasure chest or the rear apron because it's all original metal and wanted to show how dry it is.
It I think the seat has been reupholstered at some time and it's comfy,
but I repainted the door panels grey.
has OG door panels have pockets
I only painted the outside of the single cab plus the bed and inside the gates
because the inside cab was in such great shape.
Also rebuilt the spindals by John First.
Super dry underneath.
Everything is working ,turn signals,OG headlights,OG tail lights,horn,am radio with speaker,
Dash lights,dome light,inside lights ,tail lights,
new tie rods,new draglink,new center pin.
Rebuilt tranny.
Also Original motor has been gone thru and I put a new alternator kit installed.
Also put new choke cable hooked up and working.
Fuel cable reserve hooked up amd working.
Has brand new canvas and new hoops.
Original rims Powder coated ,with OG hubcaps
New tires
$28,000 or make me a offer I can't refuse
I drove it today on the freeway to Trevino and drives great and does 55-60 no problem.
Drove it to Palm spring amd back 200 miles round trip ,this truck is a daily driver.
Has new canvas now